Experiencing Miranda Olzman’s Corpulent Temporalities as an audience member I knew, having read her bio, that she was performing an extension of Halberstam’s queer temporalities and social constructions surrounding fatness using tactile modalities. Walking into the gymnasium, I first laid eyes on her sitting on a tarp quietly chatting with the people who intently approached her surrounded by gauze covered in Plaster of Paris, bins of water, paint brushes, glitter sticks, markers and other various art supplies. The space looks both fun and inviting. As one of the artists who makes up the Performance Gallery, Olzman posed in the space (I saw her both standing and sitting crossed-legged) and invited transient audience members to stop and contribute to the casting of her body.

Our co-construction, an effort of my both asking and her permission, would result in the evidence I saw before me on the ground. Body casts of Olzman’s torso, breasts, a neck and shoulder cast, and even one of her stomach and out-stretched legs. As I dipped the strips into the water and laid them on her body, I was alternately staring into her eyes, watching her mouth and touching her skin. Under her guidance smoothing the wet plaster so that it would dry more evenly, I felt comfortable as a one-on-one participant in the piece with the artist. Relaxed and friendly, Olzman spoke directly to me as I inquired about the origination of Corpulent Temporalities, learning that this was in fact, her first nude performance. Hopefully, it’s not her last. 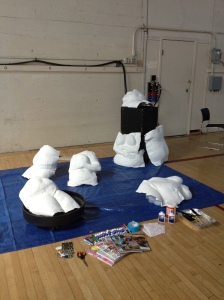 One thought on ““Corpulent Temporalities” by Miranda Olzman”